For the last several years, California has been in a state of critical drought. In about 2010 through 2012 the Sonoma County Water Agency (SCWA) initiated an extensive publicity program with lots of gimmicks and no enforcement, to get people to save water. The emphasis in the beginning was on landscape irrigation, which was seen as the easiest way to cut back. RRWPC expressed concern at the time that the program included too many ‘carrots’ and not enough ‘sticks’. For the most part, a lot of money was spent on advertising and gimmicks, and bore only minimal and inconsistent results.

When only 8 inches of rain fell on Santa Rosa in all of 2013, things began to get ominous. The reservoirs were getting unusually low. After some very heavy rain in December, 2012, the Army Corps of Engineers, not knowing there would be almost no rain for a year, and bearing the responsibility of preventing lower river floods, released about 25,000 acre feet of water from Lake Mendocino (about 325,000 gallons in an acre foot) at the beginning of 2013. And then things went from bad to worse. 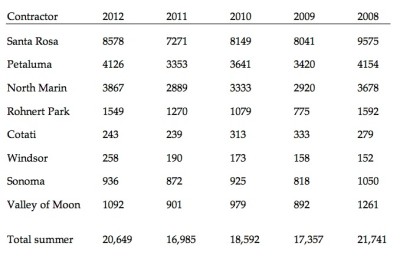 Unfortunately, it is impossible to explain what percent of any decreases in water use were a result of conservation, since many of the contractors turned to ground water and/or other local sources to compensate for taking less water from river. There may also be other occupancy and use factors that account for lower use. In general, summer use represents about half of the water sold for the year since that is when most people water their gardens.

2010 through 2012 were normal flow years, mostly due to late spring rains. It is not clear why 2011 saw much lower use by Santa Rosa, Petaluma, North Marin, and Cotati, than 2010 and 2012. 2009 was considered a Dry Year that went to Critical Dry Year in August (this triggers lower minimum flows).

RRWPC Letters on Water Use


Commentaries can be RRWPC’s official submission to regulatory agencies regarding proposed or current projects and for the most part have legal standing as formal comments.