Tuesday 2/26/19 – Came home @ approx. 1pm, saw raw sewage flowing from manhole on Orchard Ave @ Beach St, the SCWA had already been to the site and set up a 8 ½” x 11” sign, that read” Raw Sewage maybe present”, several orange cones, and a line of sandbags set up to divert the raw sewage toward homes and into our next door neighbors private drain for the backyard, which drains into all 3 of our backyards and behind our homes. At 3:34pm received Mandatory Evacuation text from SOCOPSA.ORG. The river rose and surrounded our home. At 3:00am the river rose into the 2nd floor of our home, the river was at approximately 41.5 ft.

Friday 3/1/19 – The river receded, and we were able to see the ground and street again in the early am. When we walked out on the street, we saw raw sewage flowing from the manhole and the road covered in sewage mud sludge. Esa walked to get her car which was parked on Neeley Road and took photos of our road because she was surprised the raw sewage was still overflowing and the thick layer of greasy mud all over the street right by the manhole.

The access road to our home, Neeley road, was clear that afternoon and PRMD came to our neighborhood, we spoke with them about the raw sewage flowing on the street, she said she would mention it when she got back to the office. She told me she works for the Sewer & septic department and shared her own experiences with the fires and rebuilding and tying to be on sewer instead of septic. 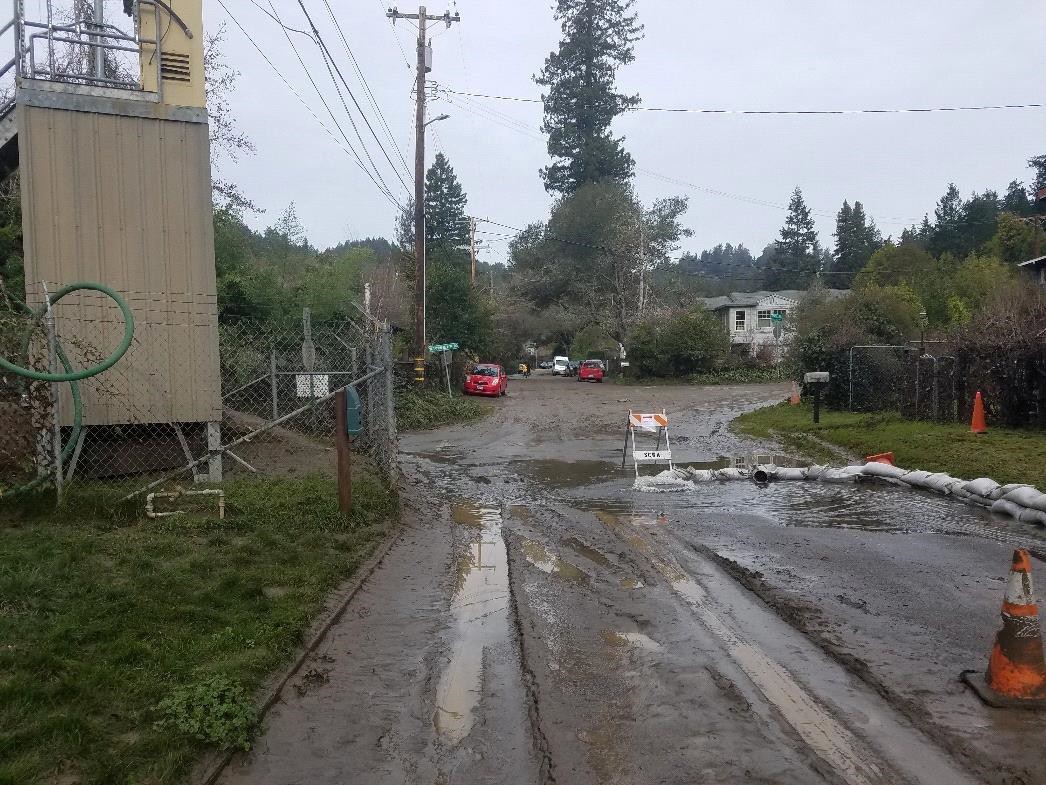 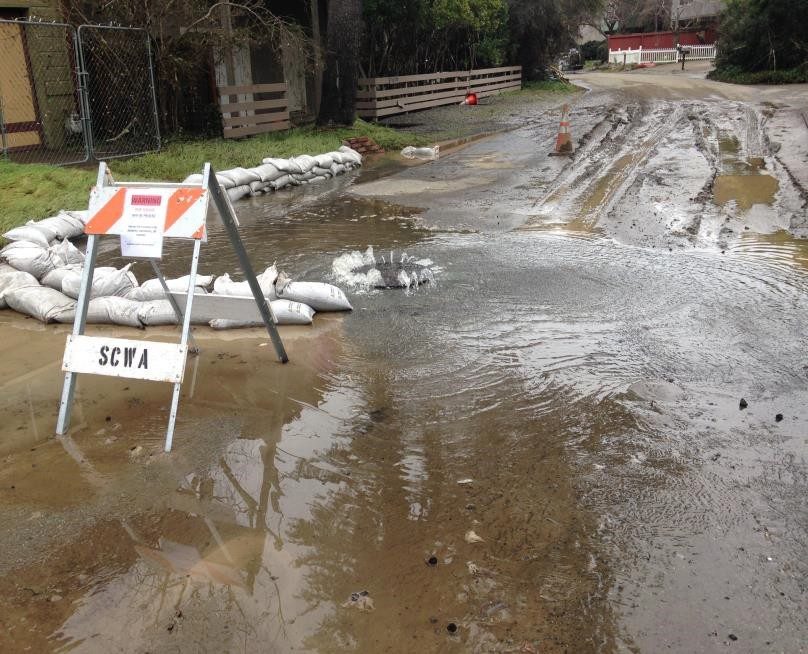 We started cleaning out flooded items from our home and bringing them to the street, I found the SCWA cones in our yard I had seen on the street before the flood in our driveway and next to our house which I used to put in front of our debris pile. I noticed SCWA had already been out and had put new cones & signage at the sewage overflow area. The old SCWA signage end up on our neighbors’ stairs.

Saturday 3/2/19 – Esa took photo before going to work in Santa Rosa all day, sees raw sewage is still flowing from the manhole toward the drain and over street that our cars and neighbors drive over. 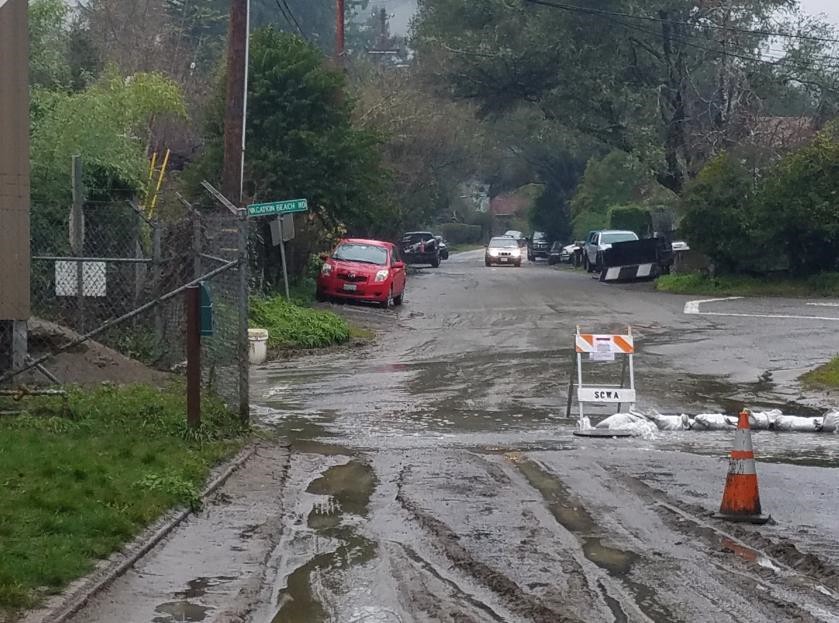 Later that afternoon our neighbor, Nick Shebal posted photos on Facebook, see below photos, describing the incident and asking Lynda Hopkins to help, Hopkins commented “The water agency is on it, and will be sending out crews to clean it up…” Another neighbor posted a photo later that day showing a truck at the manhole digging and said, “they are here cleaning it up”.

Then later Nick posted back “..we were there all day nobody came !!…” There is a lot more correspondence that you can view on Facebook, I personally saw this later after I spoke with Nick and had called the SCWA that following Tuesday. 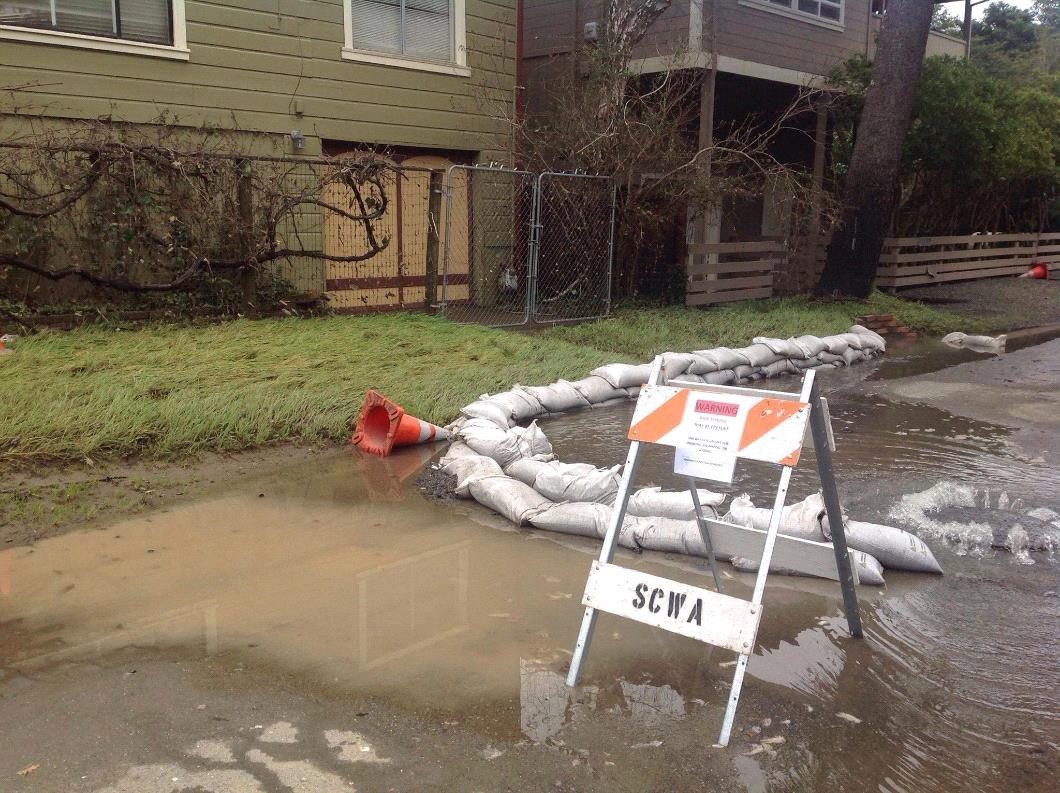 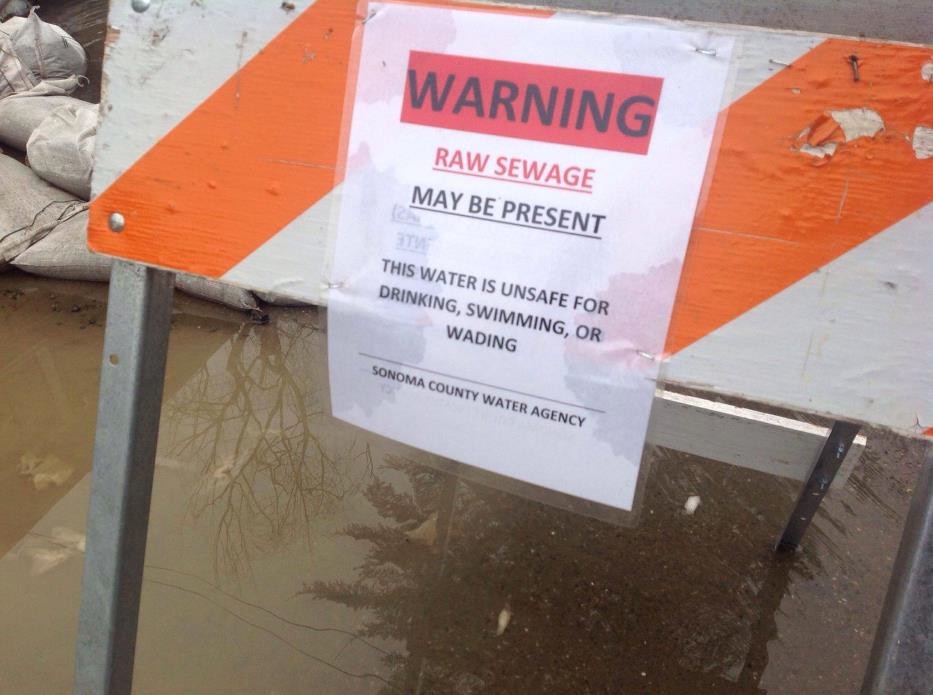 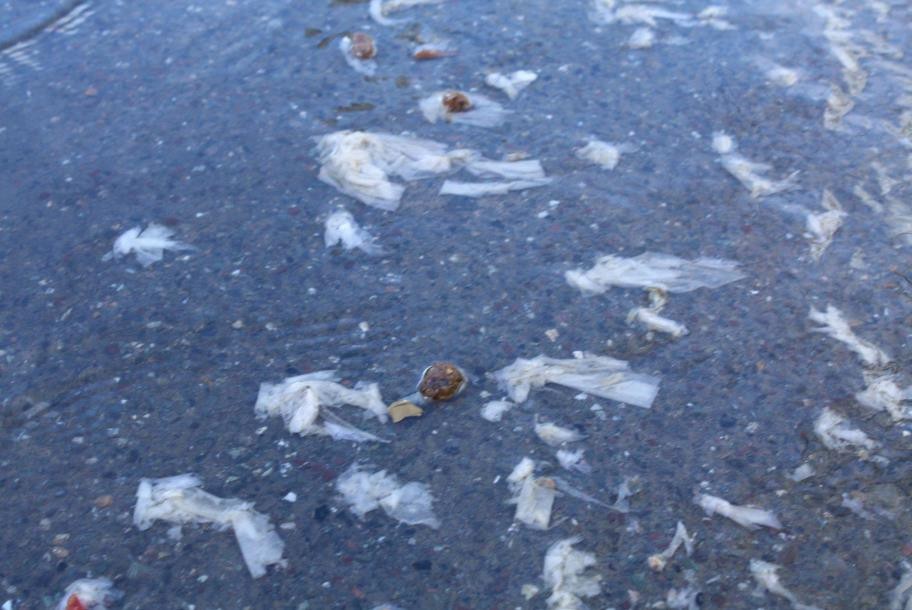 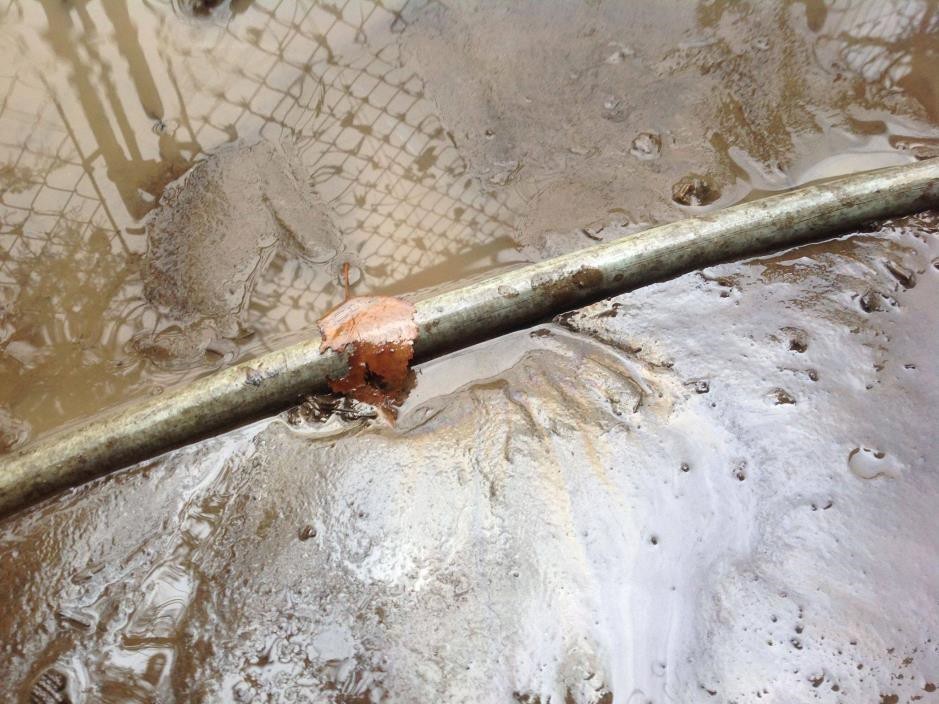 Sandbags and signage had been removed but street was not cleaned. It had been raining for days so that made it a sewage mud/sludge mess that was driven through many times. 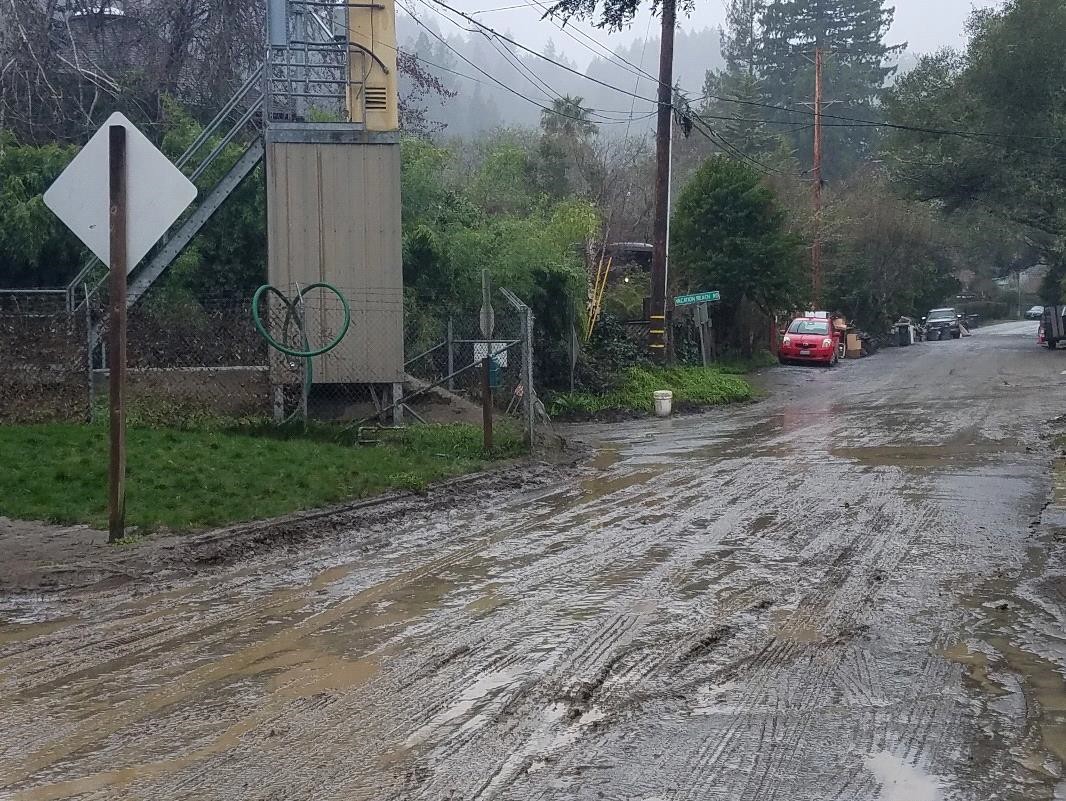 Esa spoke with neighbor Nick Shebal, who said he had fecies in his garage, posted it and Facebook and still nothing cleaned up at the site. Esa called SCWA office and was transferred to Barry Dugan. She got his mobile number on his voice mail and called and spoke with him. He concerns, Barry said he thought that it had already gotten cleaned up. Esa then told him our safety concerns for our family and community by having raw sewage spilled onto our streets for days after the flood and no one coming to clean it up. He called Esa back later and said he would need to talk to more people, she told him she would be emailing him with a follow up of our conversation.

See email to Barry Dugan dated 3/5/19 at approx. 10pm, Esa also forwrad the same email with the attached photos to Lynda Hopkins to make her aware it had not been cleaned up yet

Esa called the Health Department at approx. 8am, from phone number for recommendation from someone on Facebook responding to Nick’s post, Health Dept told her they only handled restaurants, told her to call PRMD. Esa left a message for PRMD no one returned her call.

The street had still not been cleaned. 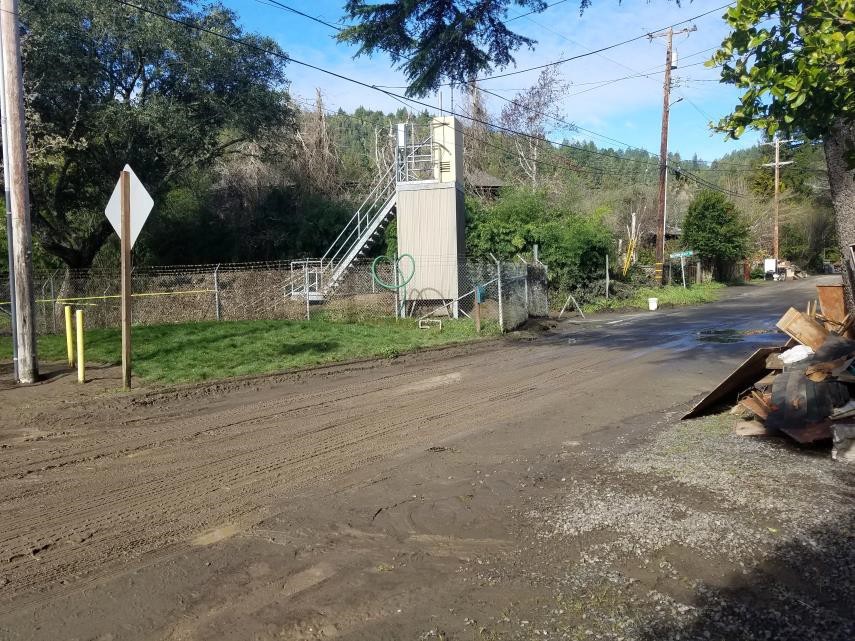 photo @ 3:50pm, taken right after they had cleaned, street is still wet.

Tuesday 3/12/19 – Esa & friend, Sastra, met with Barry Dugan & David Royall @2:30pm, met for over an hour and discussed protocol, notification, and prevention of raw sewage onto Orchard Ave. Showed where raw sewage was diverted toward homes into private drain which drains into our backyard.